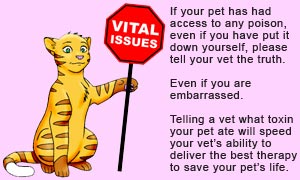 Many of you know a neighbor or friend with a pet that ingested rat poising. They took their pet to the Veterinarian and after a lengthy hospital stay and extensive medical treatment the pet was released.  This may not be the case anymore…

There are new rodenticides on the market that affect pets differently and unless the pet owner actually sees the animal ingest it, it may be too late for treatment by the time the animal appears sick.

In 2008 the U.S. Environmental Protection Agency issued a decision prohibiting the use of second-generation or long-acting anticoagulants (d-Con) in residential Settings.  It was an effort to reduce secondary poisoning in wildlife due to bioaccumulation in the livers of predators.  Manufacturers became compliant with these new regulations in 2011, with many using bromethalin instead of anticoagulants in their products.  There is NO test to detect bromethalins presence AND NO ANTIDOTE!

The rapid onset of bromethalin poisoning leaves veterinarians little time for error.  The symptoms come on faster and it’s harder to treat.  With anticoagulant poisoning veterinarians had three to five days before bleeding began–maybe a week before death.  But with bromethalin, clinical signs associated with CNS edema may be seen within 2-24 hours.  Once the animal starts showing neurological signs–CNS stimulation or depression, abnormal behavior, ataxia, hyperesthesia, seizures, coma–successful treatment becomes more difficult and more expensive.  An animal may have only have a couple of days before succumbing.

The Pet Poison Helpline and d-Con both cite the dangers of using a toxin with no known antidote as reason for the EPA to revisit the 2008 regulation standards.  Thus far the regulation has not changed and on May 30th 2014 the manufacturer of d-CON announced that they will comply with EPA mandates by replacing brodifacoum with diphacinone, a first generation anticoagulant.  While many first generation anticoagulants, such as the prototype warfarin, are shorter acting, diphacinone is not.  This is a good thing.  It gives your Veterinarian more time to treat before irreversible damage occurs.

If you HAVE to use rodenticide, look for one with the active ingredient diphacinone and keep it out of reach of your pets.

Thank you for visiting Faribault Veterinary Clinics Blog. We hope to keep you updated with our clinics news, and veterinary news around the nation!